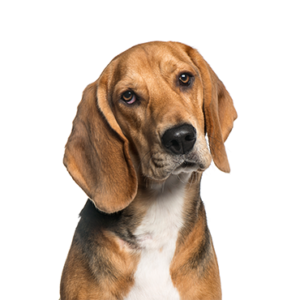 Although it is slightly different in its build, the American Foxhound breed is directly related to its English cousin, the English Foxhound. This breed serves not only as a great pet but equally as a tremendous hunter. Their loyalty and nobility are highly commendable and they particularly love exercise, hence they thrive really well in homes where the owners are physically active. In Virginia, the American Foxhound is a symbol of heroism as the dog is closely associated with revolutionaries.  Discover more about our American Foxhound puppies for sale below!

This noble breed originated from Maryland and Virginia and is the official dog of the state of Virginia. In 1650, Robert Brooke, a past colonial governor, left England for North America alongside his pack of dog hunters which later became the source of diverse strains of American Hounds. These dogs stayed within the Brooke family for almost three centuries. Years passed and George Washington was gifted some French Foxhounds from Marquis de Lafayette which were later crossed with other dogs in his keep which happened to be descendants from Brooke’s pack.

This cross-breeding birthed the furry delight that is now called the American Foxhound. This breed was originally developed by some landed gentry for the sole purpose of hunting foxes and over the years it has gained speed and stamina. The breed currently takes lots of other strains under its wing and considers them a part of the family. These strains include the Walker, Goodman, Calhoun, Trigg, Penn-Marydel and of course, July.

The American Foxhound is a breed that’s far from aggressive. They are very docile creatures, sweet even and they get along with children very easily. Coming in at 21-27 inches tall, this breed is very warm around other animals but they may act reserved in the presence of strangers. They have longer legs than their English relatives and this keeps them very active. They can be used as farm dogs, guard dogs, or just pets.

However, this breed is known to have extreme loyalty towards its owners, brave and somewhat fearless. The American Foxhound is an easygoing breed but as much as they are amicable, they can display traits of stubbornness especially when not given lots of exercises. Training them to perfection requires a lot of patience and obedience classes too. They are scent hounds meaning they can sniff their way into a different state, however once trained early, they will not be a problem.

This breed can survive extreme temperatures. They are mostly adaptable to different weathers but they should still be checked whenever the temperature increases too high or drops too low. This dog would be happiest on a farm or a barn, provided there’s enough room for them to run as far as their legs can go. They love exercising and hence their owners should create room for that in their environment.

They are very energetic and love the quiet setting. This breed has a musical bay which can be heard miles from where it’s located and the noise interference in the city doesn’t make the breed express this trait. This breed requires a lot of physical exercises otherwise they tend to express detrimental characters to the property within the household. In essence, if neglected, they can be destructive.

Remember this breed was originally trained as hunters, hence it’s in their genetic makeup pick up scent and chase after prey. In essence, American Foxhounds require about two solid hours of vigorous exercise each day and boy do they act up when they don’t get that. Once they’re well exercised they can fit in pretty much anywhere. This breed is really great for going on long walks with or even hiking.

Their endurance is pretty high likewise their agility. Active owners will find this dog as their dream breed and it is important owners guarantee the performance of all the sports this breed requires before they adopt one. If its physical training and exercise routines aren’t met, this breed may just tear up every piece of furniture in your home. Also, they shouldn’t be let loose in areas that aren’t fenced.

This breed doesn’t require a lot of grooming measures or techniques. The American Foxhound has a short coat which only needs to be washed and brushed weekly. It sheds a little, but it is nothing to worry about. However, this breed is susceptible to ear infections primarily because of its floppy ears, hence, weekly ear cleaning is advised. Also, nails should be trimmed on a weekly basis too.

The unregulated breeders who are selling outside of the USDA regulations and without a license are what we consider to be “Puppy Mills.” We are committed to offering American Foxhound puppies who will grow up to become important members of your family. We only purchase puppies from the very best sources, and we stand behind every puppy we sell.

Do American Foxhound shed a lot?

The answer is no. This breed isn’t overly furry and it has just the right amount of fur that one should trim once or twice a month. Hence, they do not shed a lot of fur.

What is American Foxhound life expectancy?

The American Foxhound has an average life expectancy of 10-13 years.

How many colors do American Foxhound come in?

This breed could come in an array of beautiful colors ranging from red to black, tan to blue or they could even be tricolored.

How tall can American Foxhound get?

This noble breed can grow to a range of 21-27 inches depending on the sex.

What is American Foxhound average size?

How many puppies can American Foxhound birth at a time?

The American Foxhound can give birth to about 5-7 puppies at a time and nurse them accordingly.

Do American Foxhound have any genetic disorders?

This breed isn’t a known carrier of any genetically related diseases or disorders, however, it is quite easy for them to be overfed and become overweight.

How often should American Foxhound feed?

An adult American Foxhound should be fed twice a day but can be allowed to free-feed for the rest of the day.

Are American Foxhound great for families?

If you have kids who love to run around or play outside, this may just be the breed for you. They are very warm towards children and do not display aggression.

Are American Foxhound easy to train?

From their early stages, training requires lots of patience, but they aren’t entirely difficult.

If you’re in need of an active, loyal, and amiable dog for your family, the American Foxhound is the breed for you.